Lose yourself in science fiction and fantasy. From space, strange creatures and more...
Welcome to the Fantasy & Sci-fi page.

A Clone Legacy - By Paul Chaplin

Check out the Intro page
for my rating scale: 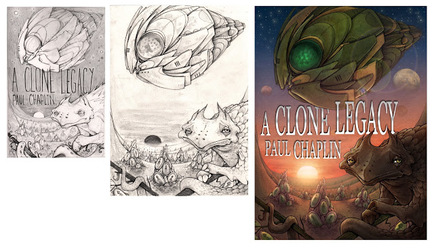 By author Paul Chaplin
Blurb
A Clone Legacy is a Science Fiction book loosely based on Blakes' 7 If you are too young to know what that is ask your parents. Torb a very lonely middle aged man has found his parents murdered and whilst trying to learn why embarks on a life changing journey. He discovers that everything he knew about his past is wrong and he must try to discover the truth if he is to have any chance of a future! Along the way he must learn how to make friends, re-populate a desolate planet with a mysterious race. Also save a strange beast from extinction. Avoid any involvement with Political parties that for some reason wish to silence him forever. Not least his must conquer his emotional immaturity and fear of his own feelings to allow himself to fall in love with a beautiful woman. Finally to secure the safety of his friends he must successfully navigate his way through a black hole. In his spare time he wants to reduce his rapidly expanding waist line.


Summary
Torb is in his 40's. He is suddenly alone when his parents Col (a clone) and Seli (Human) are murdered. Torb barely escapes, but now his life is in danger.

He meets new people, makes new friends, saves many and even falls in love for the first time.

With many political parties out to get him and his friends on their side, Torb has to stay strong and even risk all their lives so they can be left alone...

Torb has a hard struggle. The only company he has had has been his parents until Meda comes into his life, shortly followed by Jenka, Maard, Al and of course Ruby, Pearl and Sapphire (the Drakna - strange creature that they helped to save and re-home). Now, Torb has to struggle with his emotions and how to express them. (In a way, Torb (in spite of his age) has had to 'grow up' emotionally in a short space of time. With having a father that as a clone; who should no emotions what so ever and a mother whom on occasion was a rather emotional person, Torb has had a difficult time in showing his emotions.)

Torb, Meda, Jenka, Maard and Al now have to escape the possibility of being 'accidentally' killed in order to retain their freedom from joining any political party. The downside, is they have to risk their lives themselves in order to enter the 'Unchartered Zone' where many have tried, but have never return... Now they are left with the choice of stay and join a party, stay and not join any political party and try and stay alive or stay together and risk their lives together in order to escape the dangers of the political parties.... Which one will they choose?

My Thoughts
I first read the blurb after chatting with the author Paul and I expressed immediate interest in the story. Although, 'A Clone Legacy' in not necessarily the typical type of book I would read, I have bee known to read some books from the fantasy/sci-fi genre.

From the very first chapter I was hooked. This story has been brilliantly written, the descriptions and layout of the story and the characters were masterfully depicted for the reader to fully enjoy.

You can not help but fall in love with these characters. I love the relationship between Torb and the Drakna (similar to that of a man and his dog) When thinking of the Drakna I saw in my minds eye the dragon 'Toothless' from How to train a dragon.

I read this while on holiday in Tenerife this winter and I have go to say it is my first ever BOOK OF THE MONTH and BEST HOLIDAY READ for my blog.

I can truly say so far this year, it has been in my top 5 easily. Wow, amazing.

If you are looking for a fast-paced adventure, with a twist of emotions and developing relationships thrown in, then this is what you NEED to read.

With a combination of space, other species, relationships, adventure, emotions, danger and more - this is truly been the best sci-fi fantasy that I hav﻿e read ﻿by far.

I think A Clone Legacy can be enjoyed by young adults and older. Even if you are not a fan of sci-fi or fantasy, I would definitely give this a go. There truly is more to the story than what meets the eye. This is more than just a sci-fi/fantasy.

I am looking forward to reading the second instalment (due out by the end of 2015 - thanks for letting me share that Paul), So hurry on up there Paul. You definately have a fan here!


This should be on all book lover's Christmas list this year!

My Rating
I have to rate this book as a must read. Totally 5 out of 5 - fabulously written and an adventure that keeps you hooked and entranced to the very end. I was in my own little bubble the whole time I read it and then I just HAD to tell my partner all about it.

I want to congratulate Paul Chaplin for this awesome book. You are now officially my first one to be awarded the title of 'Book of the Month' and 'Holiday Read'.