For the full listing of scale rating, head to the
Intro page now! 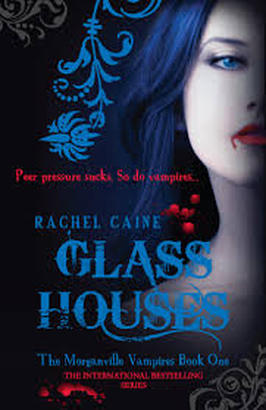 College freshman Claire Danvers has had enough of her nightmarish dorm situation, where the popular girls never let her forget just where she ranks in the school's social scene: somewhere less than zero.

When Claire heads off-campus, the imposing old house where she finds a room may not be much better.

Her new room-mates don't show many signs of life, but they come out fighting when the town's deepest secrets come crawling out, hungry for fresh blood...

Claire - A out of town student who was accepted to TPU at the age of 16. She's awkward, geek-ish, young and small, but as the book and the series develops, you learn that despite her size, Claire is tough, strong and determined. Living in the dorms at the University, she becomes the 'butt of jokes' and is terrorised by the neighbourhood bully and queen 'bitch' Monica and her merry band of friends. One thing Monica doesn't like is being made to look stupid and to 'teach' Claire a valuable learn on the matter, Monica and her friends push her down a flight of stairs as well as trashing her room.

Now Claire no longer feels safe living in the Dorms and needs to find an alternative. Claire finds a poster offering a room at the 'Glass House' and after calling she goes to the house to see if they'll take her in.

Michael - A musician and the main resident and owner of the 'Glass House'. He is a complicated soul. He is the dark mysterious, brooding and handsome type, but there's something about him that isn't quite right. Michael has a secret.

No matter what, Michael always has his friends backs, but now that he has difficulty leaving the 'Glass House', there are times when he is needed, but can't get there to help/save them in a difficult situation.

Shane - The resident 'bad boy' and 'vampire hater'. Without fail, Shane always manages to get himself and in some cases his friends into trouble or a difficult (vampire related) situation. Shane is also best buds with Michael and lives in the 'Glass House' with Michael and Eve.

He has a complicated and unfortunately, upsetting background. With his sister being killed in a fire, His mother who 'committed' suicide and a father who is an abusive drunk as well as a vampire hunter (and thankfully for Shane, he no longer lives in Morganville).

Eve - Currently the only 'True Goth' in Morganville, who lives in the 'Glass House' with both Michael and Shane. The three of them stick together and are always there for one another no matter what.  Eve has also been in love with Michael for as long as she can remember, but doesn't want to ruin the friendship and bond that they currently have.

Similar to Shane, Eve has had a difficult life in Morganville, especially when it comes to her family. Eve considers the three of them as 'the freaks'. Like Shane, both Michael and Eve are not vampire 'lovers'.

Due to Michael, Shane and Eve's dislike of vampire has put them in grave danger. Especially since they are not 'protected'. But with special 'care packages' dotted throughout the Glass House and their amazing bond and friendship, they always like to think that they are going to be okay.


Monica - Cold hearted and mean. Monica is the Morganville Queen Bitch. Raised in a 'privileged' lifestyle as the Mayors daughter, Monica has never wanted for nothing. She is basically feared and avoided by everyone. She only has two friends who are both just as crazy as her.


Of course, living in a town run by vamps, Monica is 'protected' by one of the vampires that is fairly high up in the vampire ranks. This to her makes her completely untouchable.


Nothing makes her happier than bullying those around her, especially the 'freaks' from the Glass House. Now Claire has been added to her 'hit list' ever since she humiliated her in class. Now she is out to hurt her as most as possible and is willing to go to any means to achieve her goal in making Claire's life miserable. Of course, you can't forget the tension and complete hatred that is clearly evident between Monica and Shane. Monica took pride for the main course of his heartache and misery. But deep down you learn really she is more like a jealous girl scorned by him, all because he turned her down. This truly does not 'fly' with her.

Claire has had a miserable time at TPU and it definitely hasn't helped that she is only 16 and extremely smart, which she demonstrates when she embarrassed Monica - the town Bitch.

As you follow Claire throughout the story, you realise that she is more than she seems. Yes, she is small, geeky, a total outcast and super smart, but she is also strong, confident, a rock for her new friends and most of all she is determined.

Claire's life has been turned completely upside down, yet with her help of her new friends (Michael, Eve and Shane) and her amazing ability to use her knowledge and her absolute determination, she manages to get them all through.

I love this story and once I read this book, I then had to get my hands on the rest of the series. I couldn't help but read the whole series; one book after the other. The worst part of the whole experience, was actually waiting for the books to be delivered once I had ordered them.

The characters in the book are fantastic and you can't help but get drawn into their story. I found myself loving the amazing friendships between Michael, Shane, Eve and then finally Claire.

I also liked to see the relationships and struggles that went on between the resident vampires and the resident humans.

This is one hell of an amazing storyline and the series, well just absolutely amazing! I was totally gutted when I finished one book, yet couldn't to read the next instalment. However, I was unbelievably sad when I reached the last book in the Morganville Vampires series. All I can hope is that Rachel Caine will one day revisit the series and add more stories for us all to enjoy.

All I can say is that everyone SHOULD read this series, no matter what!!!

An absolute must for: Vampire, romance, paranormal, action packed, adventure, YA story that will keep you wanting more.

I love this book and the whole 'Morganville Vampire' series. All I can say is that Rachel Caine is an writing genius. She manages to draw all her readers into the stories plot, to the point where you
either love or hate the characters and want to see what happens next.

This has been my most favourite series that I have ever read so far. Enough to the point where I have bought other series written by Rachel Caine. The Glass House as well as the Morganville Vampire
series is definitely more than a 5 out of 5 in my book. An ABSOLUTE MUST read!!!!
Product Details
Don't forget to head over to the All About Authors page for a bio on Rachel Caine as well as information on where to follow her through social media. You can also head over to the You Tube Book/Film Videos page to watch the first six instalments of The Morganville Vampires web-series NOW!